Ironically, it says “by appointment only”. I made my appointment today at 4:30. I got there, filled out the form.

The front desk measured my height, weight, then ask me to collect a urine sample. OK.

That was fine. Now that I’m recalling the sequence of events. She wasn’t even a nurse or anything. Red flag.

Then she told me to sit down and wait. While I was waiting in another room.

I could hear the doctor answering the phone, 2-3 times. I knew it was the doctor because he said his name after picking it up.

So I had no idea he was with a patient or whatever that was happening. At almost 5, I went to ask, front desk said once the doctor is done with that.

Again, I wasn’t sure it was a patient or whatever. I guess it was clear to them.

At 5:15. I went back to the front desk and said, I don’t know what’s going on here, my appointment was at 4:30, I’m using my sick time from work, I can’t just keep waiting here.

She’s like, do you want to reschedule? Of course, after driving there in traffic for half an hour and waited meaninglessly for another half an hour.

I want to try doing this again some other time. There was another older lady at the front desk, she’s like come, come in. So I finally see the doctor.

I obviously want to complain to him. He didn’t even apologize when he started talking.

He said very sarcastically “your time is so important”, and there’s no way he could have known how much longer it was delayed and was kind enough to come to reassure me.

Then he said, if you go to an emergency room, you wait for four hours.

I finally came to my senses, I said, you know what, don’t bother. I asked back my forms from the front desk and left.

I have been to other doctor’s offices and clinics. There has been delay and conflict of schedule by mistake.

No other doctors have handled the situation so terribly and unprofessionally.

Last remark: stay away, “run for your life, people!” 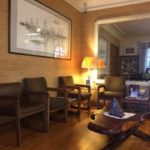