D.R. Horton Salt Lake City has been nothing short of a nightmare. We bought a townhome in the Legacy Farms community in Saratoga Springs, UT.

The flooring has issues of telegraphing (sub floor seams showing thru). This issue is caused by moisture getting into the sub flooring and warping it.

This was brought to the attention of the Superintendent (Dustin Brown) whom indicated they would get it fixed.

When we went to look at it again, prior to closing, their fix was to cut joints in the vinyl put some self leveling compound down, and then install another layer of vinyl.

Never addressing the actual problem of the sub flooring being warped.

We brought this up again before closing and was again told they would fix the issue and to go ahead and close.

After closing we requested to meet with the Superintendents boss (Brad Lambert and Syd) whom felt that their band-aide fix was appropriate and well done.

They never addressed the actual issue of the sub flooring being warped and actually indicated that the Radon System had mediated the issue. (Radon system is not a moisture control system, it is a gas mediation system).

They did see the telegraphing was still there and indicated that they have done all they are going to do.

Now D.R Horton refuses to return calls, emails, or provide an inspection from an independent Congoleum inspector in which we requested, or give us information on what the product type is.

We have sent number emails and made several phone calls.

We also called the Corporate office to go above Brad and Syd and was directed to Dave, whom again will not return calls, emails, or anything else.

D.R Horton is all about their quantity and not their quality. Their lender division of their company is the only amazing experience I have had during this whole process.

I will never recommend them to anyone. 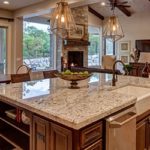