I called numerous times about their urgent care and how it works. I was informed Cornerstone Clinic For Women take walk-ins from 4-6 and they had one appt. scheduled.

When I arrived I was informed they had two people to walk in and the appointment whereas it would be an hour wait.

I was willing to wait the hour then I was told it would probably be longer than an hour because the individuals before me had major issues.

Then the front desk clerk asked me what was going on.

I informed her I did not care to discuss my issues in front of everyone (10-12 people) she went to the back; when she returned I was sent away!

I was never offered an appointment after calling numerous times instead I was turned away and told I could return in the am.

I feel they should inform patients that they can only take 2 patients during 4-6p.

If they are open from 4-6p they should be able to take patients or not continue with their false advertisement.

Instead they should communicate first come first serve and we only see patients that arrive at 4p.

I have heard bad things about this clinic and I can agree the negative comments were correct.

4 Reviews on Cornerstone Clinic For Women 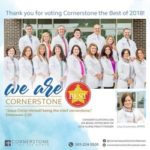