He has been running his business for a while in Alliston, but he does things on the sly. For example, he will sell OEM licenses that he pulls off of other people’s computers then sell them as a new retail license on his “custom builds.”

In the past, he was even taken into mediation by Microsoft Lawyers who were going to sue him but just threatened to open up a new corporation known as Complete Computer Solutions.

When you pay for new parts, it is a hit and miss on whether you will get new or used as he pulls ram out of old computers and sells it as new.

Because Jason (the owner) is a charmer, these things go unnoticed by his customers.

He also hires people under the table, and it has been several ex-staff that have complained about this issue. He denies that he had ever hired these staff. He has also been verbally abusive to them in the past.

He used to sell illegal access to Bell satellite, and now he sells these android boxes with illegal access to content.  You can buy a Kodi box for $50 and install the app yourself, so why are you paying for illegal services.

If you call Microsoft, they can confirm that he was selling illegal Microsoft licenses in the past. 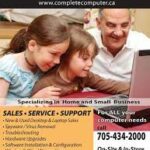