When I talked to them, I was in an impression that they would be doing all the initial feasibility study to ensure that I was investing in the right property and their assistance would be helpful in a lot many ways.

However, soon I realized that they had no sense to assess the prospects of success of the commercial projects. Their calculations were basic and they knew nothing about the parameters that must be involved while checking the feasibility of the success of the project.

After their first assessment, I sat with them to discuss about their understanding of the entire project and I was completely taken aback. These guys would tell you what you would like to listen. It happens the entire time I was in the meeting with them. First, they would suggest something. If you go against their reasoning, they will change their statement as per your willingness of accepting it.

I was clearly not able to understand anything they said about their investigation of the project. They did tell me that they would like to assist me with their consultancy as the project was highly profitable.

I knew it was and that was the reason why I was interested in it. However, after talking to them I got a feeling that the consultants were too naïve and unexperienced to take cases like mine. So, I did not go forward to deal with them.

After a week, I started getting calls from this company about further proceedings. I asked them not to call me again. But these people kept bothering me. I have been in this business for so long and have worked with many advisors and some of them were exceptional. But this kind of behavior was never shown.

Once asked not to call and disturb, no nice company would do the opposite. However, in case of Commercial Project consulting, I was given no space of mine. I think these guys do not understand the meaning of ‘NO’.

I called their manager whom I was in talks with. I complaint about the problems with those phone calls and email follow ups. He assured that there won’t be any problems going forward. It stopped for a week and these people again started bothering me.

I have blocked many numbers and email ids that are associated with this company. However, they find ways to connect with me. This is not acceptable. I am never going to work with this company ever after what I have experienced.

I would suggest not to connect with them. These people are unprofessional and have no skills that they talk about. You must stay clear of this option. They only know how to bug people without their permission. 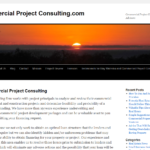