Wait till the last minute, done wrong and no accountability and disrespect the customer. I worked with a partner with initials KL.

I received a large bill from IRS for some undisclosed stock sales after using them last year.

The cost basis was not on the forms I have them, but the sale was. They did not check with me and make sure I gave the cost basis.

I wound up with a large bill from IRS when they detected something wasn’t reported.

My agent took zero responsibility and demanded I pay him. He asked how are you going to pay us?

I gave him the IRS notice several weeks before the deadline.

He said then we will fax them and mail them so they get it. We want to make sure. I thought great.

He looked at it at first and questioned the cost basis I gave. I gave him the most accurate info I had.

He had some doubts but I double checked and gave the facts and even called payroll to make sure it was correct.

I contacted him again later and he said I’m too busy and since the deadline is later I will look at it later.

The day before it was due I called him and he didn’t take my call. I stopped in to see him.

He mentioned the office was being painted and hadn’t gotten to it. That night before the deadline he sends me the note.

I need that IRS form with the bill.  The one I had left it with him.

The next day the day it was due he sent me the response late in the afternoon and said to fax it.

The numbers were completely wrong when I double checked it. I owed over a thousand according to him.

My double check calculation were less then 50 dollars. Also what happened to mailing and faxing it. Nope he just told me to fax it. If I want to mail it that costs extra.

I highly advise you not use these folks and especially that partner after my experience.

Write a review or complaint on Carpenter & Langford Cancel reply 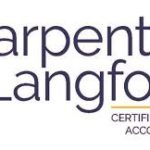