Capella Mortgage are a total scam! I needed short-term financing for a building I was buying and explained my needs and repayment plan in detail with Corrine.

I took out a loan with her and paid it off in 6 months.

The result was an increase of over $20,000 to my balance after the loan and interest was all paid in full.

Now I have to pay an attorney to take them to court to get this corrected.

Worse than a fly-by-night company!! Be warned!

Write a review or complaint on Capella Mortgage Cancel reply 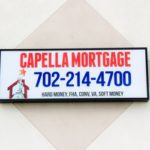