This was the first time I was ordering from Canna Provisions. The dispensary is located close to my place. However, I had been trying from other outlets until I found that this one was closest to my location. At first, I was skeptical thinking that I never noticed this outlet even when passing by from the street several times and no one ever referred them to me. Anyway, when starting with the confusion, I always happen to check online reviews. Most of their reviews are okay. So, I thought of giving them the benefit of doubt. It was just a month back when I went to their outlet looking for a vaporizer.

I had pre-ordered calling them on the number that’s available on the website. And, they asked me to visit them the next day. And, I did the same. I visited them at the scheduled time. However, they asked me to wait for around 30 minutes as they were busy with other orders. It was completely okay with me. I had the time and I decided to wait.

After an hour, they informed me that the order I placed for the exact same vaporizer was not available. However, they had a different one that felt exactly the same. The problem was the one they suggested was more expensive than the one I selected form their menu. Anyway, I just wanted to try what they had to offer. I knew they were asked for more money. It was much pricier compared to the place where I got my puffs from. However, being closet to my place, I just wanted to check if they were selling nice products. Just in case of an emergency, I could have been able to reach out to them earlier.

And, I was completely wrong. I must never have tried their products. The one they suggested me to buy was completely worthless. I paid more than I usually pay for my joints. This one was not even close to the one I use. The worst part is that it won’t lit up many times. After a few days, I even tried to contact their customer care for complaining about the same. And, they won’t listen to me.

I wanted a complete refund for that shit. But these guys just wanted my money. They sold me something that did not work as intended. Also, they lied to me about the quality of their crap. I am completely disappointed in them. Even if I had to drive a few extra miles, I would prefer doing that. This is the last time I bought something from this outlet.

Canna Provisions will rip you apart if you try seeking their service. Not only they overcharge claiming that their products are best from others. But also lie about everything without any hesitation. A completely unprofessional team. No one cares for the customers. All they care about is their profits. I better buy things from the black market. I guess that would be also cheaper than this.

Write a review or complaint on Canna Provisions Cancel reply 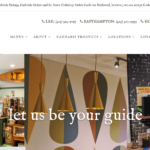