The basic rule of the construction industry is that once the rates are decided, they aren’t supposed to be changed till the end of the construction work. Any company that compromises and asks you to adjust to the cost of compromising this basic rule is a fake company. And there needs to be some strict action taken against such a company. I consider myself very very unfortunate to have encountered one such company. But for making sure that any who reads this article, understands this basic rule and to spread awareness about,” things that are to be kept in mind before signing the contract with any construction service provider,” is why I am writing this article. To highlight fraud companies such as Blue Wave Contracting Inc.

We contacted Blue Wave Contracting Inc’s, Russell McLeod. We contacted them because they told us that they have licensed plumber, as such as no other contractor in the locality. On the basis of this we signed the contract with them. We ensured such a thing because, just a few days before we started our search for a contracting company for construction work, one of my husband’s friends’ wives informed me about the troubles that they had to undergo while getting this construction work done. The contracting company that they had hired did not have licensed plumbers. And one of the plumbers who did not work according to the plan provided to him by the contracting company escaped after taking the money in advance. So, we made sure Blue Wave had such a thing. Russell McLeod was pretty impressed by knowing that we possessed so much knowledge about the construction business and how contracting companies in this business did frauds. He even appreciated us. But it was later when we came to know that his company was also amongst those companies which said lies to impress their customers!

We contacted Blue Wave Contracting Inc to get construction work done on our damaged property. We got the estimate for the work from them and others and on comparing; we found out that theirs was the cheapest. One of the competitors warned us when we told him that Blue Wave was the cheapest but then we thought that he was doing that in the name of competition! Blue Wave charged us $27,000 as a down payment for our repairing work. And then they started the work. My husband has a habit to ask the company to pause the work whenever he finds something fishy. We had clarified this habit to Russell too, he said that the general case and if any such thing happens we would by consensus decided what to do and the period of pause and what not! But when in reality my husband asked them to pause their work, the workers working there did not pause. We were told that if we wished to pause, we would instead have to stop!

After resuming the work, they asked for another $15,000 for the work that had already been agreed to in a contract. After undergoing such a fraud, when we asked them to stop working on our home because we were uncomfortable with their massive increase and change of price, they did not respond to us how they should have. Mr. Russell started ignoring our emails and messages and phone calls. My husband had to go to their workplace and there too he was made to sit and wait for long. And we had to make them understand how messy our home looked. This contracting company even flat-out lied to our credit card company saying that they had completed the job and filed a lien on our house for $27,000. This is the incidence that I would like to bring in the limelight. Which professional contracting company does such a thing?

Our only hope in this situation is that we will open consumer’s eyes so that they can benefit from the incidence that we had to suffer through. Such contracting companies that do not have licensed plumbers can benefit easily and the homeowner has to suffer. This is the fact that Washington state should know. For making our case strong what we did is that we have confirmed with Blue Wave’s sub-contractors – plumbers, tile Supply Company, cabinet vendor and others about their licenses. We were told by everyone that they weren’t the suppliers of the supplies that had been ordered to our place. In addition to that, none of them had charged anything in advance to Blue Wave, as Blue Wave claimed to us that they had.

In the end, we had to hire a contractor to complete the work that they had left out on. This was the same contractor who charged us more and warned us of the lies that Blue Wave says to its customers for charging them at a cheaper rate than others.  Blue Wave uses unlicensed plumbers to do plumbing in at its customer’s places and because they charge you less, you get carried away.  For correcting the errors that Blue Wave made has cost us almost double the budget that we had planned. There were some major flaws with the flooring that Blue Wave had done at our place. These major flaws were then highlighted by the contractor we hired, then. The flooring was removed from the bathroom and instead of cutting a straight line; they took out hardwood that was used in it and in the front entry of the house.

In turn, what we got from Blue Wave was a complaint that was filed for a fraudulent and unsubstantiated lien on our property. This was a filthy attempt to collect $27,000 for work that was never done. There were lies spoken to our credit card company stating he completed the entire project for demolishing our credit. There are several active and ongoing disputes we have discovered with the Department of Labor and Industries as well as increasing numbers of horrible reviews online that echo our experiences with Blue Wave which is what we plan to highlight. When contacted the department, the department told us to aware of the consumers about the frauds in this business. Please understand that Blue Wave Contracting Inc. Tells you lies and utters fake promises to make sure you sign their contract. 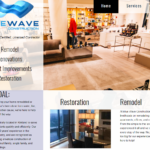