I broke my engagement ring and needed to buy another one. I had a budget of $30000. So, I looked online for few options before making the purchase. While I was doing so, I checked a ring with princess cut diamond and there was an HD video uploaded by Blue Nile. The video was misleading as the ring looked great in the video. However, when I received it, it was completely opposite.

However, the entire experience with the customer care and the company’s service was also a disaster. When I asked for a diamond expert to help me with the information on the ring, he seemed too nice. I did not doubt that in the beginning. After I received my ring, I was completely shocked to see that it was nothing like that in the video.

I paid $25000 for the ring and was looking forward to receive it. I was so happy to know that I had bought a stunning ring. However, the problem started right after I paid for the ring. The email showed that the ring would reach in few days. But, I received another email after a week which said that the order was put in backorder and it will take at least another two weeks to reach me. The wedding was almost a month late and I was just worried what if I needed to replace the ring or if was delayed even further.

I called the customer care which is very difficult to reach. These guys told me that the ring will be delivered in time and there won’t be any delays. Guess what, they were again late. It took one more week after those two weeks to reach me. When I opened the box, I was very disappointed. The ring was very awful. The band was cheap and looked skinny. Even the diamond was ugly. It was nothing like the video. The diamond wasn’t sparkling and seemed gray and dull.

Hence, I asked for a return. They said that the refund would take more than a month. Not surprising at all. These guys have shown me that they can go to any length to irritate their customers. They also said that I would be responsible for sending the package back. There was nothing I could do. I had to buy another ring even before the refund was made.

As the wedding was close not even a week later that I had no choice but to pay again. I bought another ring for $17,999. And, believe me, this ring was way better than the one I purchased from this Blue nile. I also had to pay way less than what I paid to the stupid company.

Not just that, they made me sulk during the refund process. After had initiated the transport of the ring before my wedding. However, these guys told me that they hadn’t received the package even after 10 days.

I checked with the courier and they confirmed that the package was collected at blue nile. I tried to write so many mails and hardly received replies for any. I kept trying until one day, they mailed that they had found the package as it was lost in their warehouse. They did not even apologize for making me wait for so long. Blue nile diamonds are pathetic and other blue nile jewellery are too. I have checked their ads and listings online and I do not believe that they show what they really have.

Also, they delayed my refund to 45 days. They even deducted some taxes and did not refund the entire amount. I had to follow up with them for many days before they finally transferred the amount to my account.

In the meantime, I had to suffer a lot. Because of extra spending on the ring, we had to delay our holiday. We cancelled our honeymoon and had to plan it after a month. The cancellation also costed us few bucks. But, these people have no curtsey to even admit that it was their fault. Every time I called the support, I was put on hold and had to wait for hours before someone connected me back. All these things aren’t professional. These people will take your money in no time and if asked for refunds, they will take months to make that possible. While waiting for the refund, when these guys were taking so much of time, I even thought of hiring a lawyer.

I have no other word than calling them scammers. I am sure I am never going to buy anything from blue nile. These guys are cheaters. I have seen how they work. The ring wasn’t the entire problem, but their attitude was.

These guys are frauds. They made me suffer for so long and ruined the wedding’s excitement making me busy all the while working for my refund. Give me one reason why I won’t buy it from a local shop which has the provision to actually check the diamond and how it looks personally.

Instead, these people fool you showing unreal videos and pictures. They show the magnified picture of the ring while it looked very different when in hand. I am never going to recommend it to any of my friends. And, I wish that everyone should know what kind of company this is.

If you wish to save your money and time, do not order from blue nile. These guys are all glitters but no gold. Blue nile is fake and unprofessional. They do not know how to deal with their customers. A complete waste.

Is Blue Nile legit?
Blue Nile is not a legit business owner or provider. They are not aggressive towards their customer satisfaction and complaint grievance, and hence 1 consumer(s) was/were given a Blue Nile as a negative rating, and only a few left positive feedbacks.
Where is Blue Nile located?
Blue Nile is headquarted at Online, USA. We do not have any affiliation with the better business bureau or yelp reviews platform. You can contact Blue Nile by dialing 1-800-242-2728 or visit their website www.bluenile.com/.
How much monetary loss is incurred by Blue Nile’s customers?
According to the reviews posted by Blue Nile’s customers, US $30000 was the total loss incurred, and hence the severity of the scam is extremely high.

Write a review or complaint on Blue Nile Cancel reply 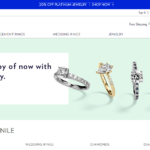