I don’t know why it took me so long to write this review, I obviously got screwed.

But since I don’t know much about taxes, I assumed it was normal. But friends and family assured me that it wasn’t.

After having my taxes done, I felt pretty confident that everything was done well.

Until a month or so later when I got a bill in the mail saying that I hadn’t paid $124 dollars in taxes.

I called Blake, but since it was now in the “off season,” they didn’t return my call until I got a SECOND bill saying that I now owed interest on what I hadn’t paid.

So I paid on my own and finally received a call like 2 weeks later where they asked for pictures of all the paperwork.

I sent them pictures of all the paperwork I received and never got another response. That was in August. 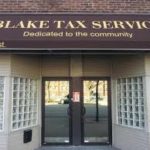