He was unavailable so they had a young man do our taxes this year.

We never received our Federal tax return and I finally received a letter from the IRS dated April 18, 2018 saying that they were missing our 1095-A form and the 8962 form.

I figured we would be less likely to have another mistake made if the CEO handled our case.

I called the morning of April 25, 2018 (our scheduled appointment) to confirm and was informed that Jaime was out on a family emergency and would be unavailable for the next two weeks, but someone else was available to see us.

When we arrived later that day, I heard a woman on the phone in the next room saying that Jaime was taking all the employees out to lunch the following day.

Clearly, he was not unavailable for the next two weeks.

We were brought in to see Crystal for our appointment that day.

She informed us that we were missing 1095 forms from my husband and that she would call the IRS the following day and then call me.

They did however, inform me that they needed the 1095-A from me, not my husband.

I called Covered CA and requested a hard copy of my 1095-A be sent to me and then I went to a reliable person to help me then fill out the 8962.

We were charged $280.00 by Ayuda to complete our taxes and not only did they make several mistakes along the way, I finally had to go somewhere else to get the proper information to make sure we filed correctly and completely.

Not to mention, we will not be seeing our return until July 2018 when our first appointment with Ayuda was on 2/21/2018!

I finally received a phone call from Jaime today who stated it was our fault for not bringing the 1095 on 2/21, when all along I thought that was why we pay people to help us do our taxes! 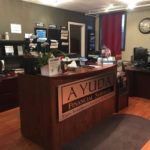