I was pretty disappointed after reading this book by Ann Handley. I love reading books and have read so many of them that I can easily make out the difference between what is worth reading and what’s not.

I am not sure what the hype was all about. Because this book does not stand even close to its expectations.

A mentor in marketing and providing people with useful tools and idea to excel at competing in the market, Ann holds an expectation.

However, I was not aware that she is one of those mentors and writers who choose to flip words by finding references online.

Nothing in the book was extraordinary. I would say few things were nice, but the negative feedbacks are way more than the positive ones.

This book is for a 5 year old boy who does not know how to google things from internet. I doubt that too. Even a 5 year old knows how to do that.

The book sounds as if an old lady is trying to make things seem interesting by making silly tantrums about the college snowflakes.

The entire book is filled with this nonsense which no one gives a damn to read.

She has advised to use Microsoft word or apple pages if you are writing something and using one’s own social account images.

Excuse me! Did she think that we are armature or are nomads who do not know how to use computers?

Mostly, Ann has tried to jumble words written by other writers and have tried to prove her stand which is complete garbage.

You cannot learn anything that you have never known. Not at a single instance I felt as if I am reading something new.

Ann makes use of what others have said and tries to rephrase it as if we do not know what’s written in plain English.

She would fit as a story teller and it would work for her better if she tells stories written by others.

As, she would suck at writing stories as well.

She keeps linking irrelevant examples to the notion made and makes everything confusing.

What made her think that she can write.

Hilarious, isn’t it? Giving ideas to others when your references are pointed towards null.

This is not at all a good read. There are lots of great writer who actually writes. Ann is only a fake version.

It would be better if you save your money instead of wasting it on the book Ann has written.

By tossing words, she has tried to make it look interesting, rather making it a stupid.

I wasted on the book when I had the chance to buy the sample first. If I would have read her sample, I would have never bought this ebook.

Total piece of crap, that is what I can tell. Her knowledge is very limited but she likes thinking that she is the champ.

Let me give you a suggestion: You should start over lady.

Write a review or complaint on Ann Handley Cancel reply 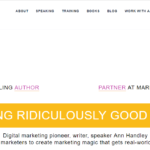