I received 1 of a 2 part order. I received 15 masks that read BLU ICE DANCER. Did not receive the 5 that were to read BLU ICE CAPTAIN. After receiving first order on 9/21, I called inquiring about the other 5 and was told they were not ready, would be shipping soon.  Called back last night to be put on hold fo 8 minutes and told to call back in the morning when manager was there because they had no information. So I called back this morning only to be told  it was shipped with 1st order and I need to file complaint with usps with tracking number, now that will not work because yes I received the order and USPS has no idea what I ordered and I am telling company 2nd part was NOT received and I have order details stating that 2nd order was not shipped with 1st part, so now how is it I am fighting to get a refund on 5 freaking masks that the company knows good and well were never shipped.

Is 24hourwristbands a legit business?

24hourwristbands is not running a legit business. They are not aggressive towards customer satisfaction and complaint grievance redressal, Hence 1 consumer[s] submitted negative ratings, and only a few left positive feedback.

How much monetary loss is incurred by 24hourwristbands’s customers?

According to 24hourwristbands’s customers, a monetary loss of US $36.00 has been reported. The severity of entire incident reports is high.

Write a review or complaint on 24hourwristbands 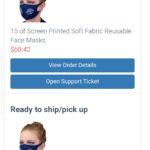